On a scorching hot weekend, 120 players ranging from the UK’s #1 to complete beginners made the trek back to Henrietta Barnett School in Hampstead for another successful long weekend of backgammon.

This was our second outing to Henrietta Barnett School – would the eponymous founder of the tranquil Garden Suburb ever have imagined she’d be looking down at so many backgammon players?

We kicked off as now customary with the Friday evening warm-up event with 41 starters and the £250 Super Jackpot with 12. Jason Pack was the first person to claim a prize, somewhat unusually scooping the SJP side pool as the only survivor in the second round – a nice consolation as the dice turned on him in the next round. As the night drew in, two rounds in the SJP were completed and the Warm-Up was left with the semi-finals hanging.

Saturday morning is always a rush, but with the experience of last year our main tournaments got running more or less on time this time around, with 68 Masters – not an ideal number for draws! – and 40 Intermediates. Once the main Swiss rounds were underway, we welcomed eight Newcomers, including two juniors, for their first taste of tournament backgammon. We ran a four-round Swiss for them, and Adam Bass came through as the sole undefeated player – we hope to see you back in the Intermediates some time, Adam! 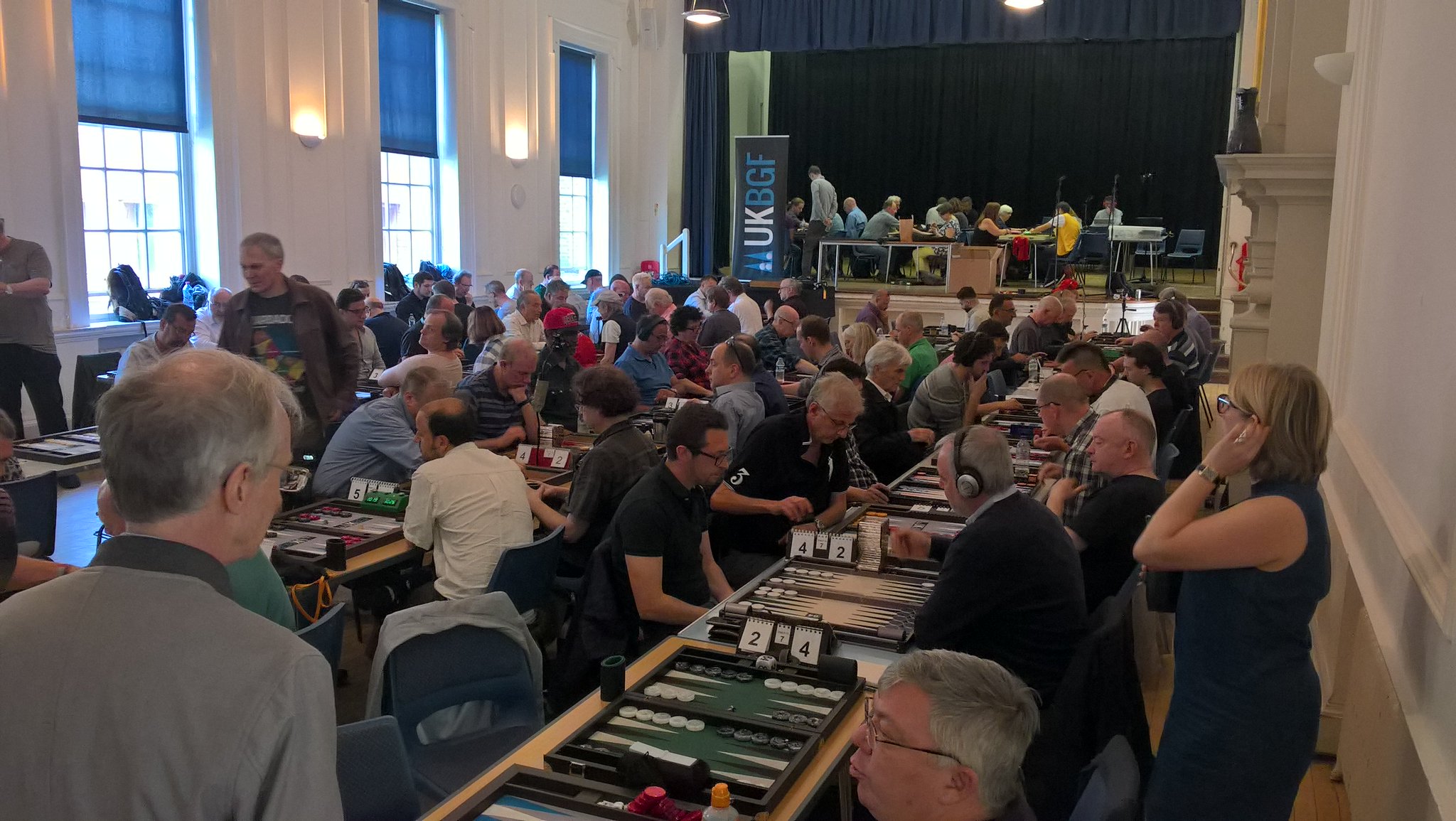 Last year a lot of games migrated to the lawns outside, but the sun proved too much for most this time! There were a lot of familiar faces on the main Swiss leaderboard, and in the intermediates Ana Mancino couldn’t conceal her excitement as she returned to the desk after each win, ending the day as the only undefeated Intermediate. Last year we were up against the FA Cup final; this year the Champions League final and a number of players were trying extra-hard to get games finished in time to head off to somewhere with a TV – Michael Battat had his colours nailed firmly to the mast in Liverpool kit for the day…

Storm clouds were gathering in the evening but this didn’t put off twelve pairs for the Doubles. Defending champions Mark Calderbank and Andy Marshall got the wrong end of the draw, with both an anti-bye and a first round against on-form Peter Bennet and Robin Swaffield. The dice were also not very kind and Peter and Robin duly deposed the champions. When play finally ended for the day they’d made it through to the final. The first Speedgammon heat using BG Buddy (as clock, dice and scoreboard) also took place, with TDs’ assistants Martha and Julia making up the numbers for a jackpot of eight. My brief attempt at playing lasted less than five minutes…

Sadly a number of players in the consolations didn’t make it back on the Sunday – a shame as there was still plenty of incentive in the prize pots for both divisions. 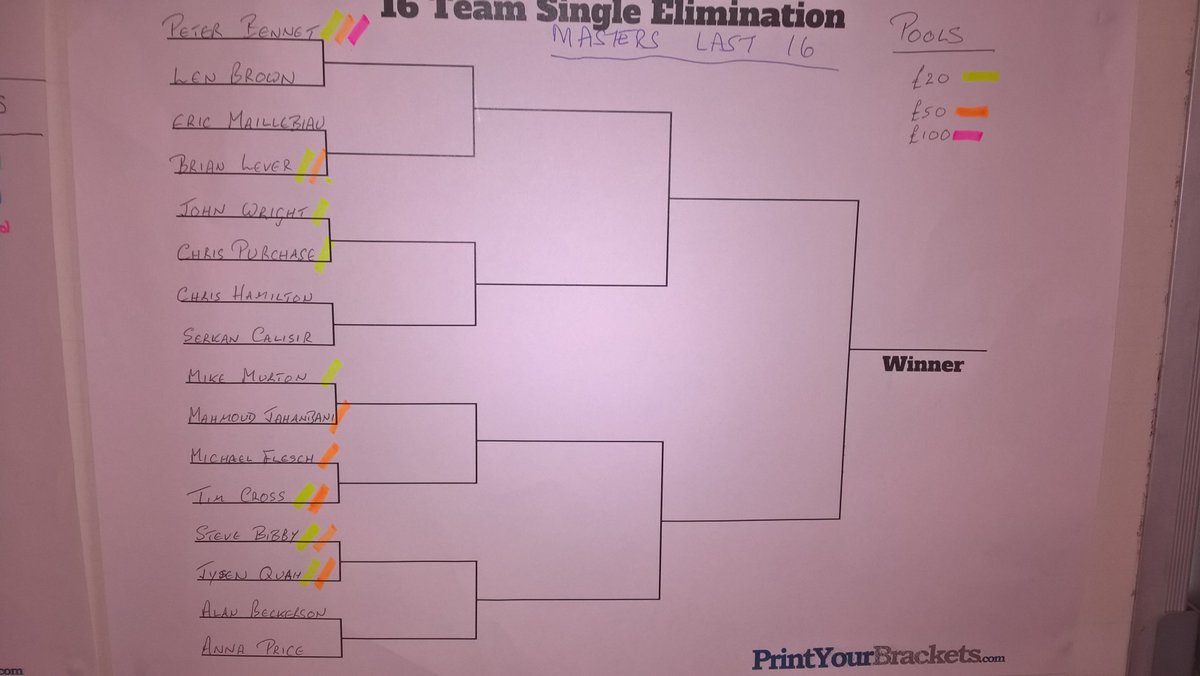 There was plenty of action for all, with both main and consolation knockouts, followed by Last Chances, and Martha was busy all afternoon signing up people as soon as they came free for jackpots, a £1 one-pointer shootout, and the remaining Speedgammon heats. Plus, there were a couple of big finals from Friday to squeeze in somehow! It meant the afternoon was a steady procession of presentations and trophies! It was well into evening when the room eventually fell quiet, with just the two main finals continuing. Both turned out to be epic matches, well balanced and hard fought – winning a tournament is certainly a test of stamina and patience! In the Intermediates, Richard Halvorsen eventually overcame Rosalie Johnson to claim the Geoffrey Parker roll-up board and the first guaranteed place in the Intermediates’ Tour Winners Invitational. In the Main,Tim Cross was in his third final of the year in a match which went back and forth; Tim was in sight of victory at 9-6 up, but a dogged fightback in the closing stages gave John a very well deserved title.

You can see the whole of the final here – many thanks to Aref Alipour for organising the streaming.

There’s plenty more pictures, including all our winners, on the tournament Facebook page.

A two-day double-elimination event with consolation and last chance, held in memory of many much-loved players. Special prizes for UKBGF members include a bespoke Erhan board, and provided by way of Wayne Felton’s legacy, a full package entry into the Masters category of the 8th Merit Open in Kyrenia, Cyprus