I have great pleasure in reporting that the sixth Backgammon Masters Series (UK) Ranking Tournament held on the weekend of 5-6 December was a splendid success, and would like to acknowledge my appreciation to Dexter and Paul Gilbertson for their kind sponsorship of the event. 24 players participated in the usual format of a truncated round robin comprising six rounds of 11 point matches. Altogether 72 matches were played under normal clock settings with each match videoed by webcams. 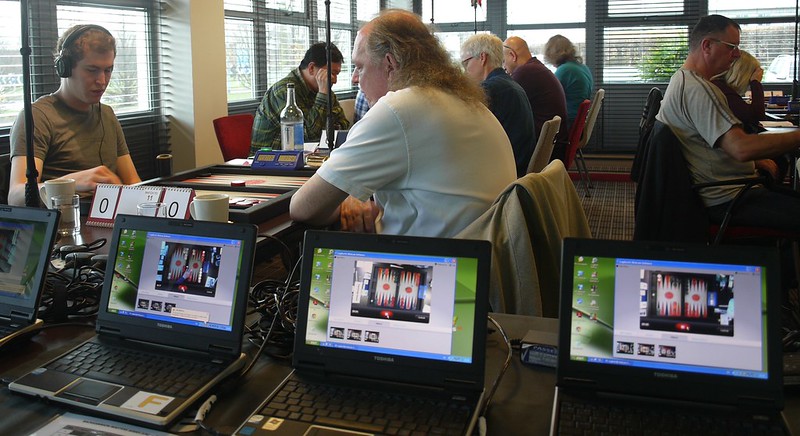 The list of players included most of the top performers at BMS(UK) tournaments, including Jysen Quah from Singapore and Michel Lamote from Belgium who had made special journeys just to play at the tournament. I was also very pleased to invite new players, David Dennis, Andy Marshall, Julian Minwalla, Rachel Rhodes and CJ Uttley, who fitted in perfectly with the friendly club-like atmosphere of the BMS(UK) tournaments, held at the Holiday Inn Hotel at East Midlands Airport.

On Saturday, after the first three rounds, Mark Calderbank, Michel Lamote and Andy Marshall were the only players without losses. On Sunday, each of these players suffered losses in a very competitive tournament, but Mark and Michel remained at the top of the Leaderboard as the only players with five wins from six. After sharing the prize money from the main pool, a three point match was played for the honour of winning the tournament, with Mark prevailing after trailing 0-2. Congratulations to Mark the Tournament Winner and Michel the Runner-Up, for their splendid performances!

In the prize giving ceremony, Chris Rogers was awarded with his certificate for achieving the title of Master (Class 2),and Julian Fetterlein and Sebastian Wilkinson were awarded certificates for jointly achieving the lowest PR score (4.25) at the previous BMS(UK) tournament in October. Moreover, Sebastian together with Peter Bennett, Gaz Owen, Antonio Sgambato and Dale Taylor were awarded money prizes for their success in the side pools. Finally, Mark and Michel received trophies and certificates to honour their worthy successes as the Winner and Runner-Up in the final BMS(UK) Ranking Tournament of the 2015 Season.

I would like to thank all participants for making this a very successful tournament. In particular I wish to thank CJ Uttley who volunteered to act as a player substitute at very short notice. Without her participation, the tournament schedule would have suffered considerably. Thanks very much CJ!

The Tournament Report Part 2 will follow within the next two weeks after the 72 matches have been transcribed, analysed, checked and moderated, in accordance with BMAB requirements, and then new gradings and re-gradings agreed and entered into the BMAB statistics database together with overall aggregate PR scores. Moreover, at this stage the PR Prize winners and runners-up will be known and reported.

Further to Part 1 of the Tournament Report, I am able to report that the match transcription and detailed analysis/checking/moderation of the 72 matches played at the tournament is now completed.

Congratulations to Chris Rogers who achieved the lowest PR of 4.33 and reduced his overall aggregate PR to 5.09 moving closer to the level of Master (Class 1). Julian Fetterlein and Sebastian Wilkinson, who had jointly achieved the lowest PR at the October tournament, took second and third places, with PRs of 4.48 and 4.90 respectively. Congratulations also to Julian and Sebastian who took first and second places in the PR-Side Pools. Julian remains on the cusp of achieving a Grandmaster title with his overall aggregate PR of 4.08.

Other notable personal performances include those by Mark Calderbank and Dale Taylor who, with  PR scores of 5.71 and 5.79 respectively, achieve Master (Class 3) titles, upgrading from their previous grades of Advanced (Class 1). The generous Tournament Sponsor, Paul Gilbertson also had a great performance with his PR of 6.43, which significantly lowered his overall aggregate PR to 7.53, achieving an upgrade to Advanced (Class 2) and narrowly missing Class 1. Rachel Rhodes and Julian Minwalla, very experienced and accomplished players but newcomers to the Backgammon Masters Series, achieved Advanced (Class 2) and Advanced (Class 3) gradings respectively. Rachel, like Paul, narrowly missed the Advanced (Class 1) grading. Julian would have achieved an Advanced (Class 1) and provisional Master (Class 3) grading were it not for an unfortunate time-out loss in round 1 of the tournament. Congratulations to Mark, Dale, Paul, Rachel and Julian for their achievements. Based on current form, it is quite likely that all these players will achieve further upgrades at forthcoming tournaments.

I would like to thank all the participants for their enthusiastic, courteous and friendly attitudes throughout the weekend which helped ensure the tournament’s success. I would also like to give special thanks to Michael Roumeliotis, Jon Barnes, Julian Fetterlein, Sebastian Wilkinson, Mark Calderbank, Julia Hayward and Michel Lamote for their speedy and effective match transcription work. Similarly, special thanks are due to Bernhard Mayr from Austria and Bruce Farquhar from Canada for their significant contribution to BMAB’s  analysis and checking process.