Stage two of the UK Tour 2017 and we head up to Bradford for the inaugural West Yorkshire Open. With a guaranteed £3700 prize pot thanks to a number of generous sponsors – including £2000 for the winner – places went pretty quickly, and ultimately 77 players in the main tournament did battle over the weekend. Sadly three places were no-shows, a bit disappointing considering the effort that went into creating a great weekend.

Saturday featured a very full day of play with six 7-point rounds in Swiss format to produce a final 28 for the Sunday’s knockout. Many congratulations to Main winner Kevin Jones, shown above (seated left) in the 11-point final with Steve Bibby.

In the Consolation final Sean Casey made the trip from Dublin worthwhile by beating Adam Stocks, and Sean Clennell beat John Ross to win the Last Chance.

The fast and furious North v South Junior Challenge 7-pointer between David Broomfield (South) and Eli Nixey-Paton (North) went to the wire. The crowd were gasping with amazement as joker followed joker in the final game, with Eli eventually prevailing 7-6. Many congratulations to both young players for a terrific match played in fine spirit, and we’re sure we will a see a lot more of both of them at the highest levels.

To add a twist to a full backgammon weekend, TD Tim Cross organised a trip to take the early arrivals by vintage train down to the delightfully scenic village of Haworth – a great way to relax before the tournament. 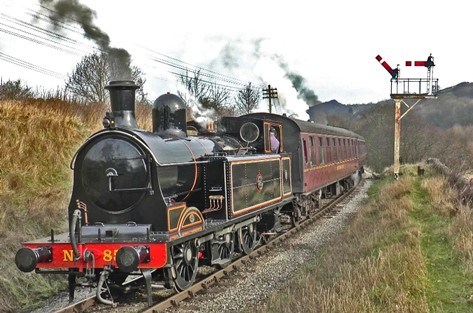 Many thanks are due to Tim Cross and Steve Lee for all their hard work organising a very successful tournament, and we’re delighted to hear that plans are underway for an even bigger and better one in 2018! If you’d like to see more pictures of the weekend, you can find them on our Flickr album.

Backgammon at the Grand 2020

An innovative format, with triple-elimination on Saturday leading to four levels of knockout on Sunday. CashOut events running alongside all weekend. Places strictly limited!